For other uses, see ZeeU (disambig).

ZeeU (지유) is a FANLOID genderswap character. He is acknowledged by SBS A&T Co.,Ltd., the publisher of the VOCALOID3 voicebank, for commercial use.

His name is rendered as "Jiyu" (지유). It appears it is just the addition of "Z" to SeeU's name with no intended meaning. And prior to the concept of and official genderswap- the idea among fans was since happening. Thus ZeeU will still be referred to as "Seewoo" or "USee".

ZeeU resembles SeeU: he has light skin, a small frame, blonde hair and blue eyes. He wears black jacket, gray pants, and black shoes; all of which have orange highlights. He wears cat ears, a CD accessory and an armband. 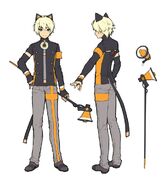 Retrieved from "https://fanloid.fandom.com/wiki/ZeeU?oldid=49972"
Community content is available under CC-BY-SA unless otherwise noted.