Rin no youchuu (リンの幼虫) is a FANLOID  Super deformed Mascot character. She is acknowledged by Crypton Future Media, Inc., the publisher of the Character Vocal Series for VOCALOID2, for commercial use.

Created December 17, 2009 by Mossan, Rin no Youchuu seems to conceptualized as some sort of pre-evolution or a previous stage of development for Rin.[1][2] Being as original as disturbing, the character become a popular meme in Pixiv, receiving numerous fanarts and parodies.

Due her resemblance and her serious and disturbing expression, it is normally depicted along or associated with Shiteyan'yo (and occasionally with Tako Luka), causing havoc or annoying other Vocaloid characters.

The character is a heavily deformed Rin head on a pair of skinny legs. 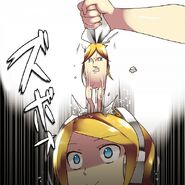 Retrieved from "https://fanloid.fandom.com/wiki/Rin_no_Youchuu?oldid=53748"
Community content is available under CC-BY-SA unless otherwise noted.