Orana has a personality of a Yandere but sometimes she can be displayed as a Moe.

Orana can be childish and portrays this in a mature manner that will make you oblivious.

Orana's Design has a mix Between Yowane Haku, another fanloid made by CAFFEIN. Her hair is tied with a Red ribbon and the ends of her hair is blended with Purple. She has a nose length bangs. On her upper left arm is the red mark "Q-071". This has no meaning whatsoever.

In her first concept design, Orana is seen to wear a black headband. Her skin is also pale. Her skirt is purple with random designs and a dangling star and feather. Her sleeves also has a glowing bar that glows when she sings. Her hair is still long but it has a rainbow gradient on the end sides.

On this design, she still has the same outfit, but the skirt part is changed into something more simple, such as turning it into just the color gray. The purple ends are glowing in this style. The sleeves don't have the glowing bar anymore and the gradient on her hair is only purple.

On her 4th year design, the top part of her outfit is turned into a polo and she now wears a purple necktie with white stripes. The ends are still glowing and her sleeves have become bigger. Her skirt is also flowy and she wears a black shorts within it.

In her three styles, she still tied her hair with a red ribbon and kept her black knee boots with purple ends (both the entrance and heel part). Her chain is also purple with darker purple as triangles. it is attached on her belt-like that connects both top and skirt

Skirt: =No Skirt= (she wears a dress; the skirt is attached to her top)

Orana doesn't have an official Voice producer, she only uses Miku's, and Luka's Voice bank, but uses a higher Octave than Luka and a Boyish-like on Miku's Voicebank 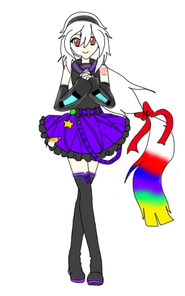 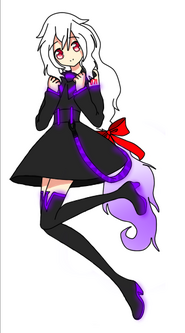 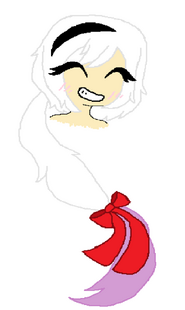 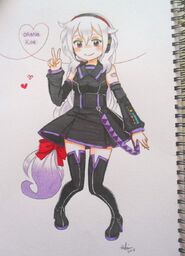 Orana Koe Drawn by KagamochiLen on DeviantArt
Add a photo to this gallery
Retrieved from "https://fanloid.fandom.com/wiki/Orana_Koe?oldid=54394"
Community content is available under CC-BY-SA unless otherwise noted.