For other uses, see Miku_(disambig).

Mikudayō (ミクダヨー) is a FANLOID Super deformed Mascot character. She is acknowledged by Crypton Future Media, Inc., the publisher of the Character Vocal Series for VOCALOID2.

September 11, 2011, Mikudayō first appeared at Tokyo Game Show 2011 as a sales promotion character for the game Hatsune Miku and Future Stars Project mirai by SEGA. The overall design was based on Nendoroid Miku, but the details were rough and clumsy. Her unbalanced big head, dull eyes, chubby cheeks, poor rubber rain boots and threatening forward tilting posture with awkward movements made for a good laugh.

In April 2012 the Sega staff used this fanmade nickname on a Nicocast program and Mikudayō was widely recognized as the de facto official name for this character.

On September 24, 2012, Sega, Good Smile company and Crypton jointly registered Mikudayō and she was added to the official fanmade characters of Crypton.

Contributors of a Futaba Channel bulletin board gave this bodysuit the name Mikudayō, which means I'm Miku or She's Miku.

Mikudayō appears as a human-size Nendoroid. Yet when compared to the official Hatsune Miku nendoroid, Mikudayo is ironically more chubbier and stands slightly higher. Her hair is lighter and her twintails lack volume and are shorter, about hip length. She wears futuristic ribbons and a headset. Her eyes are a noticeable blue and larger, and her expression seems to be in a permanent open-mouth smile. Her top is gray and loose as seen with her limp ruffles and skirt pleats, the tie is wide.. Her arm warmers nearly reach her underarms and her boots are a shiny black rubber with a wide brim.[3] 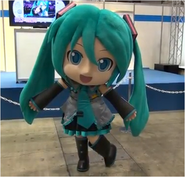 Retrieved from "https://fanloid.fandom.com/wiki/Mikuday%C5%8D?oldid=47217"
Community content is available under CC-BY-SA unless otherwise noted.