→ This Article is about Midori Hatsune. For other similarly-named characters, You may be looking for "Hatsune"

Midori, mostly known as Midori Hatsune is a young fanmade Vocaloid, often seen as a sibling to Vocaloid Hatsune Miku. Her name consists of the word ミドリ (Midori) - kakatana for "green" .

Midori's hairstyle consists of two short and fluffy pigtails tied up by big white ribbons. Her bangs are clipped up to the side of her face and forehead, the pins being fashioned with white and green bear heads. She wears a white headset which is very fluffy in the ear area and has green bears on the sides. Around her neck there is a cloud-looking scarf that seems almost as if it's floating in the middle of the air. The scarf goes from white at the top to intense green at the bottoms and has a galaxy pattern on it. In the middle of her chest there is a big green bow that holds the cloud scarf in place. The center of the bow has a metallic button with a green bear-shaped power symbol on. Midori wears a pastel green dress with over sized sleeves that go beyond her hands, ending in white frills. The bottom of the dress has two other layers of fabric that overlap on each other colored in light to dark green. The lower part of the dress also opens at the front, showing a white frilly cloth underneath. Midori wears a pair of white socks with frills at the top and her shoes are black mary-janes with a big green bow in the front, accessorized with a white bear pin on the center of said bows.

Midori's style of hair are short pigtails tied up by small white bows. Her bangs are clipped up to the side of her face and forehead, fashioned with a white bear design. Around her neck is a lengthy, black and green patterned scarf worn along the top of her white long-sleeved dress. The left corner of her dress has her serial number, "33". The hemline of her dress is stroked with a green outline and filled with little black musical notes. She has white knee-socks and black boots with green soles. Around her right thigh, a black and green chain can be seen, which has a white bow attached to it. Her headphones are bear shaped. She also wears heart shaped emerald earrings.

Midori's bangs and headset are exactly like Miku's, but instead of long twintails, she has has two green shoulder-length pigtails tied up by tiny white bows. Around her neck there is a black scarf and a green Neru looking tie underneath it. She wears a black and green sleeveless buttoned shirt with pockets on the breast area, like Teto's shirt. Below there is a black over the knee skirt. Just like Miku, she wears a pair of black&green arm warmers with keyboards on them. Her shoes consist of black boots with green soles and an exclamation point shaped orange pattern on front.

Midori's Virus design is currently a work in progress.

Midori is quite a bubbly child, seeking for knowledge. She was made to appear and behave as a fourteen year old, so thus she has no true childhood. Due to this fact, she tends to ask a lot of small questions about how things work, since she has little to no knowledge of the world around her.

Unfortunately, because of this fact, she is rather gullible and oblivious to social cues. Midori's innocence sometimes goes to an extent where she considers almost everyone she meets a friend; because of this, she can't really tell if someone has good or bad intentions, which can be a little dangerous if she's on her own.

Midori was originally created to prove that a fanmade vocaloid sibling could be made without it being a bland recolor or a Pitchloid made in audacity without any personality. As time went by, she eventually developed into her own character and slowly detached herself from this origin.

Midori isn't a Vocaloid, but an android made by a company, which has been working on androids that give service to their owners. They can be used for various tasks such as cleaning, helping with business-related work, or even as sexual partners. They would also be able to learn things with an integrated learning software installed in them.

The company began to develop the first beta androids of the series, and once the most stable beta android was finally built, they named it Midori.

Midori, while having a physical body, she can connect herself into any computer and interact with others virtually through the internet.

Midori's voice is known for being squeaky and bright; this is usually archieved by lowering the gender factor on the voice configuration. The most used voicebanks so far have been Kagamine Rin, Aoki Lapis and Hatsune Miku.

Midori's "official" Models, from oldest to current. All of the following are model edits. 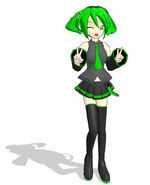 Version 6.0 by Bonehilda (Current)
Add a photo to this gallery

Version 1 by Bonehilda
Add a photo to this gallery

The models shown above are the "official" Midori models aknowledged by the creator as Midori's original model and versions.

It isn't fully known how Midori's "virus" is triggered, though it is seen to appear when Midori is exposed to an overwhelming feel of negative emotions (such as getting incredibly sad or angry to the point of breaking down). However, considering that she rarely gets upset to this extreme, the corrupted code is hardly ever seen running. When the code does get triggered though, her physical appearance changes, as well as her personality and behaviour. This version of herself is extremely selfish and somewhat sadistic, finding joy in destroying other things and harming others, be it physically or verbally. Midori does not remember anything she does while the corrupted code is running. Nonetheless, when the virus has taken over the body, it seems to know about Midori's existence and refers to it as a different entity. The virus does not respond to the name Midori either— she responds to Murasaki instead.

Retrieved from "https://fanloid.fandom.com/wiki/Midori?oldid=52387"
Community content is available under CC-BY-SA unless otherwise noted.