Owned by the Brothers Chap, Fanloid AU by Macey Mello

Homestar Runner usually wears a blue and red propeller cap, commonly called a beanie. He calls the propeller a "buzzer". In an interview with Wonkavision Magazine, he claimed that he was born with his hat on. He is occasionally seen without it. He had lost his hat in Where My Hat is At? and apparently Marshmallow's Last Stand (according to the DVD commentary) as well. In the email super powers, Strong Bad managed to make the hat pop off of Homestar's head. In the email car, Homestar had his hat "tricked out" with features such as hydraulics and underglow neon. He also claimed that if Strong Bad spun his "buzzer", it would play the theme from Night Court, but it was obvious Homestar hummed it himself. Homestar dressed as himself in TrogdorCon '97, and wore two hats as a result.

Homestar's shirt seems to most resemble a red skirt with a white star on it. Strong Bad stole the star in Marshmallow's Last Stand and used it to coax Homestar and Pom Pom into wrestling Strong Mad and himself. Despite the brothers' loss to Homestar and Pom Pom, Strong Bad tore up the star, and only by kicking Strong Bad and taking one of the stars floating around his head was Homestar able to return his shirt to its original glory. The only other times Homestar's star has been removed were in different town, in which Strong Bad imagined Homestar angrily tearing the star off his shirt and stamping on it when he "called it quits", and hygiene, when he takes it off and blows his nose in it as John. Clearly, the star is a mark of pride to Homestar Runner. In Hremail 62, Homestar shows off some of his apparently older stars, which he calls "Homestars." A real-life version of the shirt is available for purchase in the Store.

In the original script for flashback, Strong Bad wore a similar shirt until Marzipan gave one to Homestar (to replace his Duckie Shirt). After this point, Strong Bad would have ripped off his shirt, explaining why he never wore one to this day. The Homestar Runner Gets Something Stuck In His Craw offered the alternative explanation that the star shirt somehow became stuck in his craw while he somersaulted around the world fifty times.

Other than his propeller cap, Homestar's shirt appears to be his only piece of clothing, as his questionable pants are a mystery. However, a Homestar costume is available in Strong Bad's Cool Game for Attractive People as separate shirt, white pants, and white shoes with blue soles. He wore a gray version of his shirt in impression while doing a bad imitation of Strong Sad. In Costume Commercial, Homestar is seen wearing pants when trick-or-treating as Bubs at Strong Bad's house.

In long pants, Strong Bad claims that Homestar doesn't have shoes, but has blue soles glued to the bottom of his feet. Several times, however, this has been disproven, as in New Boots The Cheat animated Homestar's shoes being unambiguous objects. This was confirmed in Hremail 2000, where he was shown holding his shoe, though the same hremail shows a close up of his foot with warts and hair, and no clear distinction between shoe and foot. He also has two larger shoe sizes; sizes 18 and Strong Mad.

Note that the shirt is also straight compared to the eyes on the unfinished toon, Tis True, Pom Pom, Tis True. 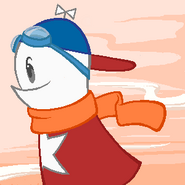 With Strong Bad. Fanart by Happypants3 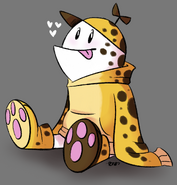 Fanart by Cosmic-rust
Community content is available under CC-BY-SA unless otherwise noted.
Advertisement