Andopoid Anya is a FANLOID character. She is a kind, fragile and affectionate girl. Anya's a little clumsy. She wants to become a favorite for her dear man, but can not understand whether he likes her or not. She's also a huge YOHIOloid fan, and when she sees him, she can't think what she's saying. Anya blushes terribly when she sees Oto. It is unknown whether it is sympathy or Oto just her idol.

She shares the same surname as Andopoid Aria and Anya could be a name after the illustrator named AnyaAndTenshi.

Andopoid Anya is a derivative of KAITO and Xin Hua. She shares similar color schemes and design; this being to have long aqua colored hair held by a small blue hair bow, dark blue eyes, and blue headphones on her head. She wears a uniform similar to Xin Hua; this being a white shirt with a light blue tie with clef symbols printed at the ends and the sleeves outlined with deep blue tips. She has black and blue knee high boots and a short skirt. She wears bracelets on her wrists and carries a blue microphone. She is 168 cm and weighs 55 kg.

In the canon VOCAMIX Anya is secretly in love with Zetsune Oto. She is an understanding friend. In VOCAMIX, Anya is a bit awkward and shy girl. She is always supported by her best friend - AYA. Andopoid Anya dreams of world peace. She, at times, can be jealous when Oto is next to other girls, but she always holds back negative emotions. It is also known that Oto likes her mint smell. Anya can't resist mint sweets, so she always smells like that. And later, she very liked Amaine Fubuki. She was one of those who wanted to be accept Fubuki into Zetsune Project.

Anya was the first of the project who found Kero and made friends with him. Soon, Oto gladly accepted him, and then his friends.

Oto and Fubuki continue to care for her. But Fubuki slowly surrenders and decides to care for Angel. Anya begins to be jealous. Fubuki realizes that something is going wrong and gives up this attempt. Anya begins to pay more attention to Fubuki, and also began to looks at other guys. Oto begins to feel lonely.

Soon Anya finds out that Oto fell in love with Jaqu too. Oto accidentally talks about something with Kero that infuriates Anya and she chooses Fubuki. 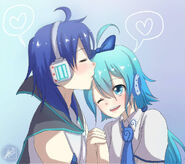 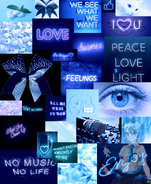 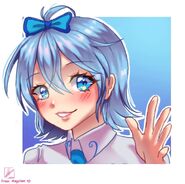 Retrieved from "https://fanloid.fandom.com/wiki/Andopoid_Anya?oldid=55730"
Community content is available under CC-BY-SA unless otherwise noted.