Kero is a 16-17 year old, homosexual, vampire who has a human disguise. His voice is a highpitched version of Hiyama Kiyoteru. His first name was Kyuket Suki, which literally means "Vampire" in Japanese. His old design looked Cryptonloid-ish, with detached sleeves, a black bandana with a green stripe in the middle, two belts on each side of himself, and glow squares on his knees and shoes. In July, Kero was given an UTAU voicebank, voiced by the same provider of Hito Zenne, but, the voice didn't fit him as much as his Fanloid voice did. So, he was reverted back into a fanloid a few days later. The voicebank was reused as Hito's Act 1. Kero wasn't always in the Zetsune Project. He started out as a voiceless fanloid made in Gachaverse. (I no longer use that, though).

Akiyama Kero has green messy hair with a black undershirt with an over coat. He has dark green pants with red and black boots. His undershirt has been made to resemble a heart monitor, above a heart. His coat is green on the inside and has two green stripes on the bottom. His headset is red and black, with red on on each sides of the side of it. The mic is on his left side on his head. 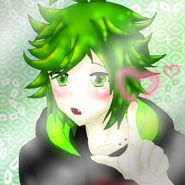 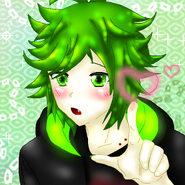 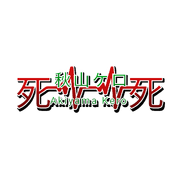 Hito and Kero triple baka. (Base by Canon-Dbases)

"I'm allowing you all to download his models. Please respect the rules, just like Hito's model." -Hito-P.

Retrieved from "https://fanloid.fandom.com/wiki/Akiyama_Kero?oldid=55857"
Community content is available under CC-BY-SA unless otherwise noted.